This is the second post in a series documenting my full dungeon process. Check out the other posts in this series here.
The background of a dungeon is important information for the referee to have. At the same time, long pages of dry backstory can really hinder the enjoyment of reading/running a pre-made dungeon. I often find my eyes glazing over three sentences into an adventure introduction before skipping ahead to the room key to see the goodies.
Even long-winded room keys make me bored. It always boggles my mind to read a review on Bryce Lynch's blog and read "this eight page adventure features seven rooms." Less than one room per page? Insanity. I crammed the entirety of the 98-room Cherry Crypts into only fourteen pages (and that includes TWO copies of the map, and a couple pages of tables at the start). Obviously that's a little terse for some folks, but it works for me. I don't need to strive for that much concision for Slime Baroness and the Lady of Unterbranch Keep: I want the layout to work in my favour more, and that often requires larger headings and white space.
Some dungeons can be explained in a handful of words. Slime Baroness and the Lady of Unterbranch Keep (SBLUK) could too, but it does contain some specific things going on that deserve a bit of explanation.

Slime Baroness and the Lady of Unterbranch Keep 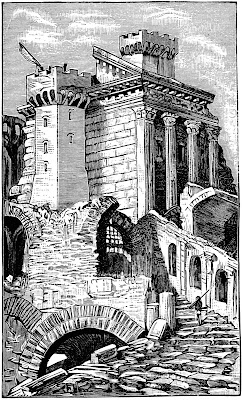 "Unterbranch Keep sits atop a rocky promontory overlooking a backwater village and valley. It is common knowledge that the Keep has been abandoned and deeply haunted by slime and spirits for 33 years, ever since the Lady Unterbranch—a renowned warrior—went missing. At the last new moon, some brigands thundered into the valley, brigandized the innocent country folk, and retreated up to Unterbranch Keep; they have not been seen since."

This is the elevator pitch for the dungeon. Getting across basic information in only a few sentences. This allows the referee to picture the location in their mind, and start some wheels turning in regards to the possible creatures and contents. This isn't necessarily written to be read to the players, so it doesn't need to contain any explicit hooks (like mentioning treasure). It might be a good way to deliver the basic common knowledge regarding this locale, though.

These rumours are the primary method by which the dungeon is introduced to the players. Each one should stand alone (without context from the others). But each one should also provide a tantalizing detail or helpful hint. If there is no action that can be taken with this new knowledge, then it is useless. It's sometimes difficult to write these rumours before the dungeon is complete, so I've written four now and will return later to write another four (and edit the first four if needed).
For the Cherry Crypts I wrote some rumours before I had finished writing the full key. But since I never revisited them once I had finished, they didn't really make sense in the end. They also didn't provide a call to action, a helpful hint, or any useful information for the players. I want to avoid that mistake again, and to provide meaningful rumours which will actually make a difference in play.

This is the full explanation of the background. I feel like it is still a bit too long and wordy. I might be able to cut it down a bit further. It also includes some commentary (like about the possibility of helping one or both noble ladies). This set of bullets should be essential reading for the referee, as it gives them the full context of what is happening. Hopefully they can glean enough from it to feel confident running the rest of the adventure straight from the book.
I might need to return to this once I've written the full thing, again to add anything new that I invented during the full writing, or to edit things that no longer make sense.