When I prep for games, I appreciate resources that I can reuse.

I've written about this before with reusable dungeon maps. Another example is the same die roll table I use to help me stock dungeons. I also use Chris McDowall's Small Tables format for all my encounter tables (d6, 1-3 are three variations of a common creature, 4-5 are two variations of a uncommon creature, and 6 is something big and special).

So here are six reusable traps. The mechanism is simple and the details can be reflavoured again and again. I believe that you could use any of these traps with the exact same group of players at least twice before anyone would notice. Even if they do notice, that doesn't mean it's not fun. 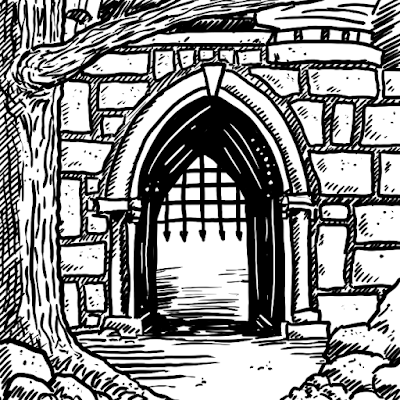 1. Glue Sword Pond: A pond/lake of clear water, at least eight feet deep. A magic/bejewelled sword is stuck at the bottom, quite visible from above. The sword is covered in a strong adhesive that isn’t soluble in water. This cannot be seen from above -- anyone grabbing the hilt is stuck fast. (Stolen wholesale from Prismatic Wasteland).
Read more »
at December 10, 2021 No comments:

This is the third session report for my game where I ran two players through Slime Baroness and the Lady of Unterbranch Keep, a dungeon of my own making. Click here to see the other play reports as well as my series detailing my full dungeon process for creating the dungeon.

During Session One, my two players entered the Keep for the first time and explored the upper levels, discovering the Slime Baroness herself. In Session Two they explored the main level, and almost got dispatched completely by some flying pots and pans (RIP Henrietta the hireling).

Now, in Session Three, they suited up with a new retinue of hirelings and descending into the lower levels. This is where the true fun began.

My two characters were a Garden Wizard and a Butcher/Warrior.