After months of dibbling and dabbling, I have a working copy of my Goblin Laws of Gaming/Into the Odd RPG hack: CATACOMBERS. Get the PDF here. 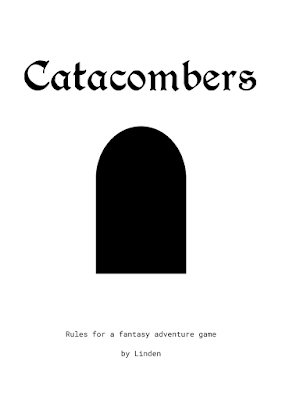 This game is designed to be played in a medieval-esque fantasy world, where human beings are the norm and other races & monsters are strange and mysterious. You could probably jam in whatever gonzo weirdness you like along the way, but player characters start off fairly 'normal.' It has a lot of generally-accepted OSR contents, like XP-for-gold, exploration turns, and encounter dice. It also has lots of GLOG-type stuff, including the magic and class templates. The combat is taken wholesale from Into the Odd with just some minor adjustments.

I now will go through the whole document, section by section, just rambling about why I made certain decision.

I spent a lot of time writing a concise player-facing introduction. I took a lot of inspiration from Skerple's GLOG hacks, Rat on a Stick and Many Rats on Sticks. Skerples is a skilled writer and obviously puts a lot of hard work into making rulesets that are digestible. I wanted to have something that could introduce a brand-new player to the game, even if they've never played a role-playing game. I also wanted something that would speak to an experienced role-player to let them know what kind of game this is.
The main concepts I wanted to express for this game were the situations in which dice are rolled, and the lethality. For me, roleplaying games are about playing roles. I want the game to take place in a shared imagination. Rolling the dice has its place, and that place is rarely and only when called for by the Referee. I want players to actively avoid rolling dice, so I just straight up tell them that: "avoid rolling the dice if you can." I explain that the odds are bad, and that you should be planning and scheming, rather than looking for what checks to make.
The other thing is the lethality. I want players to know what to expect. And in this game, you should expect your character to die. It's right there on the first page.
I also stole The Lamp from Moonhop, Type1Ninja's GLOG hack. This is a succinct player advice text shaped like a Lamp. Moonhop is amazing, and was a big inspiration for combining the GLOG and ItO.

Catacombers has no checks. Only saves. You roll a saving throw when "you attempt something where the risk of failure has interesting and irrevocable consequences." This is very important, in my opinion. There's nothing more boring than making a die roll, failing, and having nothing happen. See: 90% of perception checks, climb checks, lockpick checks when no danger is present, etc. A save is made to avoid danger. Sometimes the referee will call for a save from something outside player control (Dragon's breath), and other times you're making the choice to jump across the chasm.
Abilities are taken from Into the Odd (with the swap of Will to Charisma just like in Electric Bastionland). Charisma is your general catch-all magic save. Sorry Save VS Magic Wands VS Rod, Staves or Spells, etc.
I took the Item Slots = STR idea straight from Knave. So brilliant.
For initiative, I wanted a simple side-based initiative where character ability still came into play. I haven't really tested this out so it might change.
Combat basically works exactly like Into the Odd, with attacks hitting automatically and armour reducing incoming damage. Morale checks are basically as per B/X, as is Reaction.
I also put a lot of work into writing a simple explanation for Exploration Turns and the Encounter Die. I feel like I landed on a good mix of gaming rules and natural language. Knowing for a fact that your time in the dungeon matters and is being kept track of vastly improves the game.
I also included very simple wilderness travel rules. Basically I like hex crawling for the simplicity it can offer, so I don't want to complicate things too much. For me the fun of travel is the encounters along the way, not the actual tracking of movement.

I stole the Usage Die from Black Hack.
I tried to write up some basic Hireling explanations and took the pricing list from Knave.
I also included a simple price sheet so players can know what to expect when shopping in town. I like roleplaying a weird shopkeeper as much as the next person, but I also like the option of just saying "you spent the morning shopping, everything on this list is available somewhere, tally up what you buy and let me know" and then moving on. We'll save the blow-by-blow roleplay for the crab-seller they find in the dungeon, or the 1000-year old elf wizard running a curio shop in the big city.

The spread of 4d4 for abilities is nice. Keeps things in the middle more. I am a huge fan of 50/50 odds for player rolls, so I like keeping things tight on the bell curve, so that most of the time no saving throw is too far off those odds.
I wrote a quick d20 list of starting items, called an Inheritance. This is something I LOVE doing. My goal with these starting objects are that they are a) NOT consumable, i.e. they're something that can be used over and over; b) they're unique and make characters feel special; and c) they have many possible uses, especially outside combat. This is also a great opportunity to inject some setting details. If I wanted to run a more science-fantasy game I would add some laser mirrors or electric boots or something.

My central departure from the GLOG core is my classes. After tons of deliberation and many different versions of classes, I decided to only run with two classes: Martial and Magician. A Martial character is sort of a blend of Fighter, Thief/Specialist, and the Ranger. You have opportunity for customization at Level 1 and Level 4 because you get a choice between some of the Powers. But you also get the fun of some randomization, just like you would with a magical character rolling for their spells. As games go on, I might add to this power list. I also run my games with lots of in-game benefits, like magic items, special equipment, and curses/blessings, so there's lots of ways to add to characters outside the base rules.
My Magician is basically the same as the classic GLOG wizard; I just changed the name to get that sweet alliteration with the Martial class. I have two schools of magic, of which my first version I've talked about at greater length before.

I wrote a few new spells, and took a lot of other ones from Arnold Kemp and Skerples. I love spells.

I put a lot of work into the layout for this game. I love monospace fonts and therefore used Roboto Mono for the body text throughout. I used PT Mono for the sub-headings, and Berry Rotunda for the main headings. I love the medieval feel of the font, but also that it is immensely readable.
I wanted to keep this game short. I know lots of people have this goal, but for me I can't stand a longer game. I want new players to be able to spend 5-10 minutes reading and be able to grasp anything I throw at them. The PDF above is 16 pages long but I also worked in a two-page spread layout mode. That means this game can be printed landscape on regular 8.5x11 paper and folded into a booklet. This would use only 4 sheets of paper. This is really important for me for my home games, because I like to be able to look at a real paper copy, and I also like being able to give out a copy to each player. Plus, with only 4 sheets of paper and minimal ink usage, I can afford to let my players keep their copy.
I used simple black and white public domain art throughout. The cover art is mine alone, and despite how simple it looks I'm actually super proud of it. The black doorway arch just feels so inviting and ominous. Really plays off the title: you're about to go into this black door, where light and life are strangers. Darkness and death shall surround you, and try to take you for its own.
at October 12, 2020 2 comments: