Building my Eponymous Megadungeon in 2021

This blog is named for a megadungeon that I've been trying to build for the past year or so. It is called the Lapidary Ossuary because it's themed with gemstones and bones. Lapidary means relating to gemstones, and an ossuary is a burial place where bones are stored.

More specifically, I want each level to have a specific gemstone, with factions, creatures, traps, and treasure inspired by the myriad of cultural meanings assigned to that gemstone. I also want to have the entire thing function as an enormous burial site for an ancient fallen Empire, jamming in as many different forms of human burial forms as possible (ossuaries, tombs, crypts, mausoleums, sepulchre, etc.). 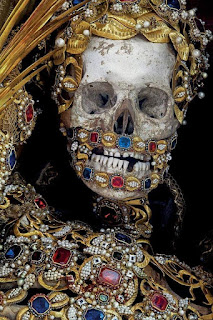 I've already posted an introduction to this megadungeon, and a draft of the first level. However, I've decided that I hate what I've done and I need to take a completely different approach. I spent months brainstorming specifics—monsters, creatures, room contents, etc. But what I should have been doing too, is designing the broad outlines of the dungeon. A meta-map of levels and how they interconnect. A general history of the dungeon and the layers of time that have compressed into the place. I have theme and a million bullet-pointed ideas, but I need a box to draw around these things to make some sense of it.

I also needed a break. COVID has been a wild time, and I've been through school, a move across the country, unemployment, and a new job this year. I wasn't inspired anymore. I stopped designing the dungeon and tried to enjoy the games I was playing in, and learn how to have fun playing RPGs virtually.

I worked on some other stuff, like my GLOG hack Catacombers. And a forthcoming large dungeon, that doesn't quite hit the 'mega' scale, but is still the largest dungeon I've made since high school (how I wish I never threw away those old notes...)

In the new year I'm going to slowly start ramping up some Lapidary Ossuary megadungeon content. I need to make some maps, to ensure that the connections between levels work the way I want. I need to detail the general history of the dungeon, so that at least I know what the timeline has been. And I have a new idea for the form of the dungeon too—it begins in a large low stone building half buried in the woods, overgrown with roots. This means it can have multiple entrances on the first level, without them being too close together like I had with my hillside entrances previously.

All this to say—stay tuned as I continue my megadungeon creation. This first post serves as an introduction. It will be followed by more of the process.