Certain political ecology case studies work excellently as inspiration for dungeon ecology. Human beings and our mixed motivations are endlessly interesting—porting these real-life examples over to the monstrous factions of a dungeon is a fun exercise and can yield very interesting results at the table.

Yeh et al. (2014) wrote a paper about Tibetan yak herders and the change in lifestyle they experience due to policies put in place by the Chinese communist government. In their traditional lifestyle, the yak herders had the power to react to snowstorms. Herders shared rangeland and therefore were able to transport their yaks from one area to another in anticipation of bad snowstorms. Chinese government policies subdivided land and forced families to keep their yaks only in certain areas. This meant that they were not able to move their herds into safer areas when snowstorms arrived. Furthermore, the government subsidized things like heated shelters and blankets for the herders to keep their yaks warm. But these subsidies were not followed up with additional support, meaning the heaters often broke and there weren't enough blankets. As climate change impacts have increased, the ability of yak herders to deal with the effects (i.e. snowstorms) has decreased—due to government policies. 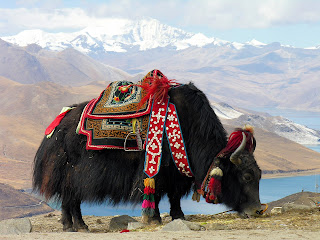 At its core, this paper tells us that misaligned government control has prevented people from reacting to dangerous environmental effects.

This analysis of the political ecology of Tibetan yak herders can easily be ported over to the dungeon. Here are three ideas I came up with, each subsequent one taking another level of abstraction away from the original point:

Other political ecology analyses can be ported into dungeon concepts. The deforestation of Mexico to fuel silver mines by colonial Spain. The change in Amazonian soil when indigenous agricultural practices are banned. Shoddy wetland construction in the United States incentivized by slapdash policies about replacing destroyed wetlands with new ones.