A Bestiary for Penrod

The Principality of Penrod is pleasant state, ruled by Prince Pepin the Young, surrounded by jolly allies and good-natured rivals. Chief exports include timber, flax, tin, literary culture, and temperate fruits. A brutal king many many generations ago hated all the minority cultures of Penrod and so did his darndest to eradicate them by forcing the dominant language on the populace (on pain of death), thus solidifying the Penrodite culture as we know today: literate and unified. 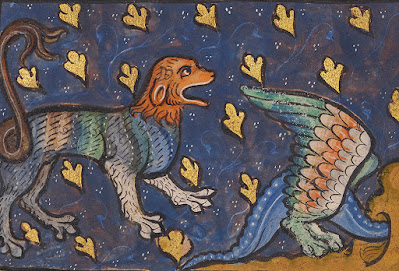 The Penrod of today is full of chipper flax farmers, timely tin miners, and flouncy quill-bearing fops in the capital, safe from the frigid foothills of the southern reaches, thick forest to the north, and sinister mountain peaks at the eastern border. And so—there are beasts abound. At these borderlands lurk creepies and crawlies, and in the liminal spaces of all human life (underground, beneath floorboards, in the walls, between specks of civilized light) dwell the horrors that shall consume us all.

When refuse from the flax harvest is piled at the edges and corners of the fields, and these fields lay adjacent to drained cranberry bogs and the hopeless cranberry pulp laid aside after being pushed through juicers and strainers, the rotting flax and cranberry mix and mingle, slowly birthing a Flaxenvaccim.

This slim creature is fragile and wet—its bones are flax fibres and its flesh is cranberry jelly. Slop sloughs off as it walks, and it often has to stop to scoop bits of jelly back onto itself, or to affix a fallen flaxen fibula back onto its knee joint. When first born, they're usually the size of a small child, but proportioned like a human adult: two legs, two arms, a torso, and a lopsided head with no eyes or mouth.

As they grow by feeding on god knows what, they solidify and gain strength and stiffness. Eventually they mature at about waist height, but never really gain full strength. They love to hide in fields and steal cats.

Squirrels eat nuts, Birds eat seeds, Churchomps eat churches. Scholars speculate that the act of worship imbues church buildings with innate magical energies, which act as energy sources for the Churchomps. Most regular folk know that the singing attracts them, and they just eat the building as a casual snack. A Churchomp would happily eat any stone building, but they just love singing so much that they don't eat the quiet ones.

A Churchomp looks sort of like a very large bear: it walks on four legs, is covered in long, fine, hair, and has cute rounded ears. It has a strong jaw and about fifty huge flat molars, which can be seen when it opens its mouth to take a bite out of a flying buttress while you sing a hymn.

Like an elk on its hind legs, conferencing in groups of no less than five. The Butler Eilic is a close relative to the regular Eilic, which is just a species of elk which lives in the mountain valleys. Legend says that the first Troll King enchanted an Eilic to be his butler, and even after the Fall of the Trolls (they're much stupider today than they were 10,000 years ago) the Butler Eilic spread through the mountains and remain prim and proper to this day. Usually they won't bother travellers unless they get agitated by some nitpick about your table manners.

When a mountain goat and a wolf battle on a cliffside, sometimes one of them loses footing and plunges to their death. Even more rarely, they both do. When that happens, their fallen bodies release a whiff of spirit, which enters their closest mate. The next full moon, the mate gives birth to a Capralupo, a twisted creature with the back half of a goat, the front half of a wolf, the horns and eyes of a goat, and the snout and mouth of a wolf. It has shaggy mottled fur and a steady stride. It hates itself and both it's parents—it will stalk goats and rip their throats out; it will play dumb and bleat innocently to attract wolves and then ram them into cliffsides to crush their ribs. It is insatiable in its fury, and will not deign to allow anyone to stop it's rampage.

Penrod is famous for its giant Panthers. In addition to its enormous size (akin to a moose), each of its paws has seven toes, each tipped with a huge retractable claw. Sometimes if the Panther is well-fed it will speak to you instead of stalking you. Conversation usually is restricted to demanding explanation for trespassing it's terrain and bargaining for meat with threats of violence. Particularly cunning Penrod Panthers will tend to a private warren of rabbits, farming them for food and fun.

Instead of legs and talons, this bird of prey has two human arms which grip branches tightly. Instead of feathered wings it has craggy brown branches covered in waxy green leaves. In place of beady eyes it has bright red berries. It still has a beak, which it uses to consume both flesh and soil.